The design, which we want having in the modern underwater robots

The first underwater robots has been created in 50th years of XX century. Practically the all experts of that time have started to predict, that in some years an underwater robots will replace divers. However already more half of century has passed, but the profession of diver has not disappeared anywhere. Moreover, practically in all heavy rescue operations under water the people participate, and only occasionally robots.

The reason, because of which robots cannot perform all work of divers - people

The whole generation already pass, but the underwater robots of 60th years of the last century and their the modern analogues, externally practically was not changed by nothing. The innovative technics for underwater works has all same form - the ultrasound scanners, video cameras, engines, floats, lanterns, manipulators, etc, are placed in a cubic frame. Due to it technical parameters of the modern robots are practically identical to parameters of a their ancestors.

Today more than 400 companies worldwide develop the underwater automated systems which have the cubic form. They are used for work in the big depth, where people cannot dive. But however on small and average depths practically all works are spent by divers - people, because they manage much better with construction, rescue and ship-raising operations, than cubic robots.

And as all experts today recognize, that robots not can replace divers - people, therefore the employers provides of the professional underwater staff by special hard diving suits. And in this connection the engineers of the USA, China, Korea and other countries actively work for improvement of the hard diving suits.

In order to the robots could carry out in the full measure of functions of divers - people, they should have a humanoid structure and regime of remote control by a copying mode. The given conclusion is dictated by exclusively by practical reasons.

Why the underwater robot should have a humanoid structure?

The robot which has not of a qualitative artificial intellect, is not capable to perform self of the certain kind of work in underwater space. Therefore only two methods of management by the underwater robot remains:

by means of buttons and joysticks;
with help of regime of copying management.

The second way of management allows to make concrete actions under water up to 10 times more quickly and more effectively, than the first. This so, because the person from the birth develops the impellent skills and he can naturally feel position of the own body in space. For this reason to man will be much more convenient if he transmit these feelings on the humanoid robot and so he can intuitively understand, where there are its limbs (hands and legs of robot). However for that is important, that the robot had just the anthropomorphous structure.

In a copying mode the person - operator can distantly operate a head and finitenesses of a mechanical an avatar. And man - operator at use of a modern technics also can fine see all that surrounds under water of the robot.

In order to the person did not have "seasickness" by reason of discrepancy of the video received from the robot, and a signal, which his own the vestibular device sends to human-operator, the special support mechanism is necessary. Then the person - operator, which dangling in space, will can have the same tilting concerning horizon, as the torso of the robot under water. To a word, the special support mechanism, which ideally approaches for these purposes, has been invented in 90th years. 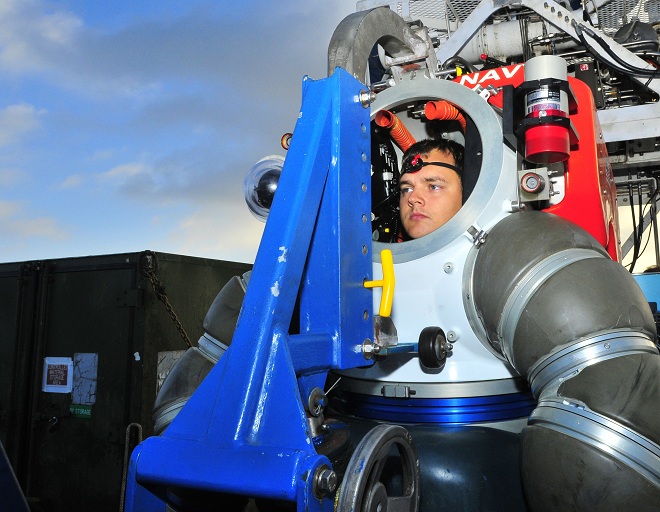 The anthropomorphous robots-avatars will allow to us:

1. We can completely refuse use of rigid diving survival suits which not only are inconvenient in management, but also are dangerous to the person.

2. We can refuse increase of depth of immersing of the diver - person in a regime with saturation of gases in pressure chamber, what will relieve people from necessity to work in dangerous conditions on the big depth and will lower quantity of casualties.

3. We can to a great extent get rid of cubic robots, which inconvenient in management.

Creation of anthropomorphous robots, by means which we can operate in a copying regime, enables to an usual men-divers easily learn for a new profession as an operators of mechanical avatars. Due to it the profession of the diver will cease to be hazardous to health and lives.

Besides this the robot-avatars can plunge on greater depth, its head will rotate in all the parties, improving the review for the operator - person, hands - manipulators will become much stronger, than hands of the usual diver - person, and at mass production the robots-avatars will cost much more cheaply, than advanced, but the same inconvenient, rigid diving survival suits.

The understanding of these questions already starts to be looked through in works of the experts of robotics. As an example of attempt of creation of underwater anthropomorphous robot-avatar we can consider work of experts institute of Stanford: